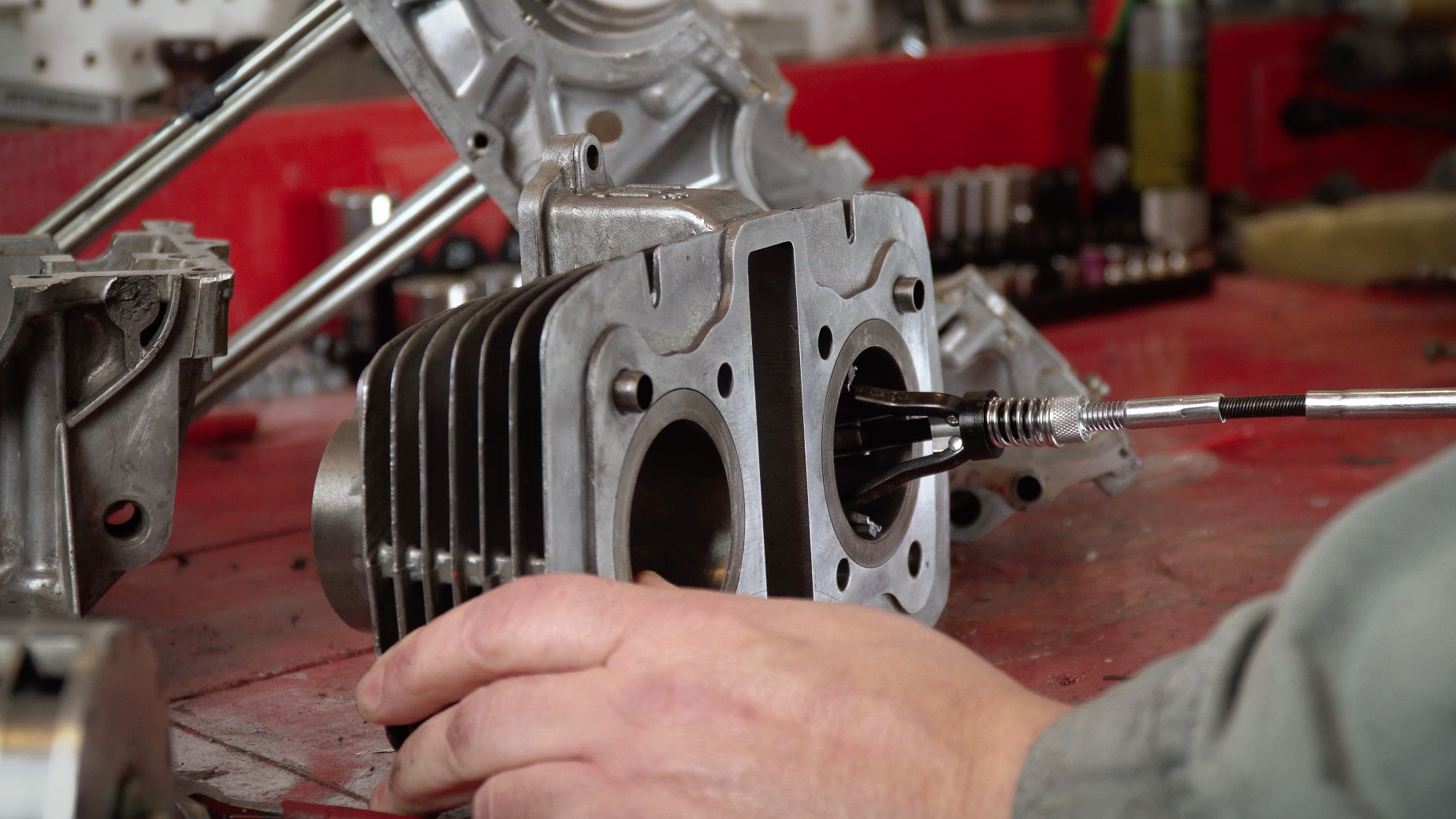 We decided to take on the boring of our cylinders at home after we tore into the engine on the Honda SL175. The complete rebuild was deemed necessary for several reasons (more on that story in another article). The first duty was to assess the power making end of the equation… the pistons and cylinders.

Borrowing a friends brand new bore gauge, we took a little time to spec out what kind of wear the little engine has seen in almost 50 years of life. As it turns out it wasn’t too bad, but bad enough (more on that process here). So the job at hand is to bore the old cylinders and replace the pistons with larger ones so everything seals up just like Honda intended.

Now, when faced with punching out an engine for new pistons, most reasonable folk would turn to an experienced machine shop with all the proper tools at their disposal. However, “reasonable” is something not often said about us. So while looking at some forums on the ol’ inter-web (always a great way to start a decision process) we found some evidence that it might be possible to get the desired results at home, with a simple hone, drill, and time.

In fact the post on the forum even suggested that doing the job this way would make sure you knew it was done right… and not rushed. It was stated that using a hone to bore the cylinders was a slow process and provided good control over the result.

Sounded like a good plan. Of course the fact that it would save a few hundred bucks of machine shop time also factored into the decision.

To get started, we acquired a cylinder hone used for automotive engine finishing. Typically this tool is used to provide a quick resurface of the cylinders. The abrasive stones are not very aggressive and don’t remove much material. The little 175 bore was just a millimeter or two larger than the smallest possible usable limit on the hone. The stones were also large enough to cover the entire cylinder from top to bottom and even have about half an inch overlap outside the cylinder. This was thought to be a good thing because we figured it would help ensure the bore stayed parallel.

After setting up a suitable work surface, we started honing / boring. Using some oil on the surface, the process quickly made a massive mess. Oil was flinging all over the basement workbench and walls and floors.

Being extra careful, we stopped frequently to check the measurements to make sure everything was working. It was working too… just very slow. For every 0.001″ we needed to hone for a good 10 minutes. We had to go to 0.5MM overbore… so that is roughly 0.020″… quick math that is about 3 hours. Two clyinders = 6 hours of honing.

Ok, that is doable… not fun, but doable. So we kept going.

Then, we started to notice on our frequent checks with the bore gauge, the cylinder wasn’t boring straight. Even though the honing stones covered the entire surface of the cylinder, they were cutting more on the top and bottom than in the middle. This is not what we were after at all. So as soon as we saw a couple extra thousandths show up we had to re-think our tool.

As you can see in the video, the solution was simple enough… we needed smaller hone stones so we could target specific areas of the cylinder – namely the middle. A quick wack with the hammer and our “customized” honing stones were back to work. It didn’t last too long however, the stone came off the backing plate. After replacing the stones two more times, and modifying them accordingly, we found a better tool.

The local auto parts store sold a very small hone designed for use on brake calipers. Instead of being at the very smallest end of the usable limit, this one was on the very largest end of its usable size. But it worked… and actually much better than the large hone. It was so much lighter and easy to use, even though it might have even been a little bit slower it also offered even more precision.

With our new small hone, we settled in and finally polished the surface of the cylinders down to a very uniform and very straight bore… right down to 0.0005″.

In the end, would I do it again this way. No. It ended up being about a 13 hour process all said and done. It made a huge mess, and was actually fairly stressful experience. The $250 that the local machine shop charged our friend for his engine seemed well worth it.

Then again, we do have a great story to tell, and the satisfaction of doing the work ourselves… but I don’t think this is a story I will need to tell more than once.