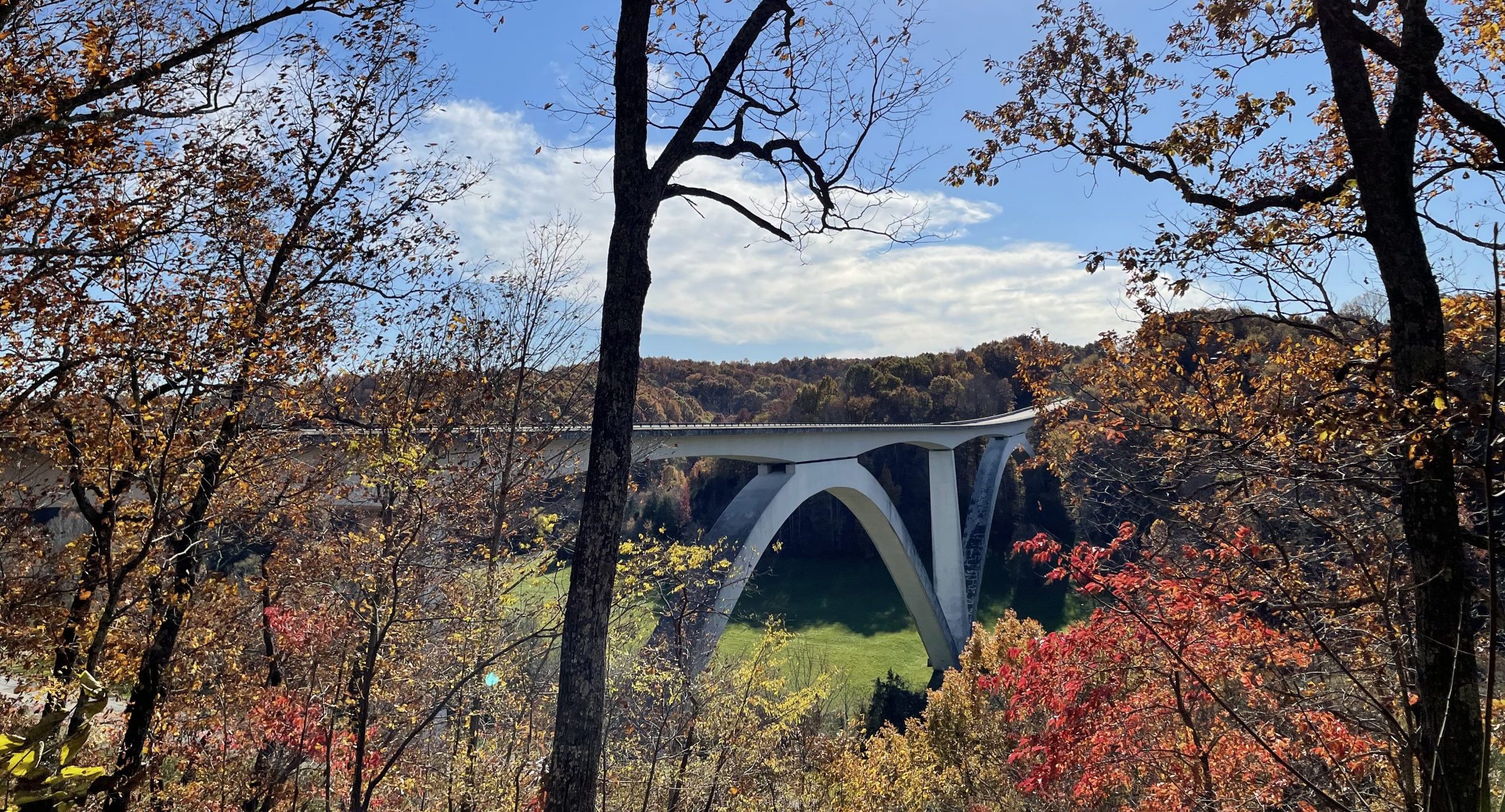 The plan for the “next big one”, long distance, cross country ride, started to materialize mid year 2022 – even before the “first big one” was underway. While there are still options on the table to pursue a Pikes Peak Adventure TAKE II, the plan for 2023 is to take a simpler path (at least logistically) and ride a circle through the mid-south – Kentucky, Tennessee, Alabama, Georgia, and back home to Indiana.

The basics of this plan are simple, but when it comes to putting together a ride that covers over 1200 miles and 7 days, simple pretty much goes out the window. The details of the route are listed below and highlight the severity of the effort needed to complete such a ride.

Starting in Evansville around noon on Sunday provides folks time to attend church prior to setting off. The route speeds out of town on the quickest road possible and over the bridge to Henderson Kentucky for a “quick” lunch at Dairiette drive in.

Having fed our gut, we will feed the need for the open road. The ride to camp on Sunday is the shortest and most direct of the entire trip… only 132 Miles / 4 hours of seat time. The first 100 miles are on secondary county roads (presumably paved). Still offering plenty of turns, these miles will go by quickly with 3 stops in approximately 2-1/2 hours of riding.

The stop at the Village Market located at the entrance to the Land between the lakes will provide provisions for the nights camp. Once in the park, the route turns to fire roads for the last 30ish miles to Wranglers Campground where we will rest for the first night.

The shortest ride of the trip, day one still ends at almost 6PM where camp will need to be set and dinner made and adjustments to the bike for the rest of the week can be made.

Heading out of camp at 7AM, we ride on more fire roads for approximately the first 30 miles taking an estimated hour and 15 minutes (with a short stop to rest and take in the lake view. The first actual stop will be for fuel and convenient store breakfast at Sudden Service.

After a “high quality” meal to start off the day, we turn to some twist and turns that cross from dirt to paved and back for the next 21 miles (approximately 1 hour) until the next stop at a convenience store.

The next 50ish mile section is a mix of road conditions taking the most remote yet direct path to the Narrows Of The Harpeth where we’ll stop and take in some scenes before lunch at the Fill-in’ Station.

A short ride after lunch gets us to “Ham and Jams Country Store” (also the Loveless Cafe / Hotel an alternative for lunch if we decide the Fillin Station didn’t work for some reason) where we can take about a half hour to take in the goodies and fill up our tanks for the ride on the Natchez Trace Parkway for the next 90 or so miles (you can follow the link to read more about this truly unique experience of a highway – it is actually a national park!). We will take a break in Leipers Fork for some coffee at the RedByrd Coffee Shop.

A quick stop at a Walmart just a few miles from camp will provide dinner supplies. Camp will be at either the Meriwether Lewis Campground (which doesn’t take reservations and is first come first serve) or the Fall Hollow Resort Campground. For the EXTRA ADVENTUROUS among the group, there is an alternative camp site at https://mywhisperingoaks.org (don’t say I didn’t warn you).

The route for day two keeps us in the “green zone” and should provide some stellar ridding time.

Day three hits the road on some tough dirt / gravel paths that may in fact might not connect… or cross over some private property, so some back tracking may need to be done… that is where the “adventure” comes into play.

The first stop is 30 miles… about an hour of riding. A quick top off of the gas tanks and high octane convenience store breakfast and another 50 miles to Soda Pop Junction for a beverage and leg stretch.

Another 45 miles we arrive in Lynchburg, home of Jack Daniel’s – so of course we’ll take a few minutes to take in the sights before enjoying some BBQ at the Barrel House. After lunch we ride along the hills to the west of Tims Ford Lake and on to Miller’s Gap Overlook.

Turning off of HWY 16 into the James D. Martin Wildlife Management Area we get some serious twisty roads before stoping at the L&N RR Stevenson Depot for a quick stretch and final push to Trenton GA and Ingles Supermarket to pick up dinner.

Finally, the camp for Tuesday is set for Cloudland Canyon State Park in Georgia. Even though we are arriving at the late hour of nearly 7PM, because we are on the far western edge of the eastern timezone, sunset isn’t until almost 9PM in the summer. So there should still be some time to check out the amazing scenery in the park.

Cooudland Canyon State Park (Tuesday’s campsite) is south west of Chattanooga TN. So day four will see the route head into the “real” mountains. First, before we reach the National Park, there is about 60 miles of highway to cover, including a section through the Chickamauga Military Park – a Civil War Battlefield with some awesome gravel paths that ride right through the historic monuments.

The ride reaches the edge of the Chattahoochee Oconee National Forest about 11AM and for the rest of the day the route alternates from valley-creek-side-roads, to ridge-top views and switchbacks in between. Some of the roads will be paved, and some will be rocky, rough, fire roads, rutted and overgrown (at least that is the expectation). Regardless, the views will be spectacular, and the afternoon will be long. So the lunch at the Dam Deli at the Ocoee River in Ocoee Tennessee will be welcomed rest time.

We should arrive at camp by 6:30PM with enough time to set-up camp, have dinner, maintain the bikes and get some rest.

The trerrain gets extra interesting on Wednesday as we head into the southern most part of the smokey mountains. Camp for the night is at Indian Boundary Campground and should make for a restful evening.

The first 30 miles of Thursday’s ride is still spent in the mountainous landscape. By 8AM, however we leave the mountains behind and continue north taking the most scenic roads possible to the west of Knoxville Tennessee heading back to Kentucky for Thursday night’s camp spot. A stop for some coffee at Downtown Java will keep us going through the suburbs for another 130 miles or so until we get back to some proper backroads.

The route from there on is more inline with the rest of the week’s roads. Curvy, twisty, mixed surfaces and remote… in fact we will go miles without passing much of anything – other than trees and nature of course. That will make the site of the Red Star Grill around 1:30 evermore appreciated. Back on the road we’ll make a quick stop at Phillips Grocery before again going deep into the woods until we cross over the Kentucky boarder and camp at the Great Meadows Campground in the Daniel Boone National Forest.

Friday morning starts off inside the Daniel Boone National Forest for the first 40 miles then winds through the Kentucky hills towards Somerset then turns slightly more west heading in the direction of Bardstown Kentucky. We will make a second stop at a distillery, this time for some Kentucky Bourbon at Makers Mark, and enjoy lunch at the nearby Cozy Corner Tavern. With stops for breaks and fuel along the way, the winding roads will lead us to a familiar Otter Creek Park for camp on Friday night.

The route through Kentucky might lack mountains, but we know that the roads in central Kentucky are some of the best anywhere!

The ride home on Saturday crosses over the Ohio river into Indiana on some familiar roads from the Kentuckia Ride back in 2021. The Saturday ride is the second shortest milage (just 20 miles longer than Sunday) but will still be a fun ride through the Hoosier National Forest and stopping for lunch in Cannelton’s Lawson’s Bar and Grill.

The route was planned using the Furkot tool and you can see the full loop here:
(click on the title in the upper left hand corner for larger map and more details)

The Next Big One – basic plan